Welcome to WordPress. This is your first post. Edit or delete it, then start writing!
END_OF_DOCUMENT_TOKEN_TO_BE_REPLACED

Barry was a bit of an oxymoron. He was an incredibly sweet man who could be a royal PITA. He was a genuine, honest person—one of the most honest I’ve ever met, often to the point of bluntness (see PITA comment above)—who was also a caricature of himself. He was thoughtful and hilarious and serious and didn’t take life too seriously.

You get the point. Basically, he was unabashedly human.

And despite being a curmudgeon, he was vibrant. I miss that. I miss how when I was around him, I felt freer—like I could be as honest and carefree and blunt as he was. We yelled at each other as frequently as we had long philosophical discussions about desire and Brecht. We argued like an old married couple and sometimes it was a bit much but mostly I reveled in it. He said “you know I adore you” and it felt unconditional, so I didn’t worry about saying the wrong thing or looking stupid or offending him (like I usually do with people, especially new people). It was like we were family—immediately.

Looking through my archives, I found this, from almost exactly 4 years ago, when we first met. This is a classic Barry story, which he never let me forget (and will haunt me about, no doubt). It was also my first real-life encounter with Team Neeley, so this will never not be a pivotal memory.

I was to pick up Barry from the airport in Boston on my way to the theater in Cambridge. I gave Frank my number to give to Barry, and said, “And you can tell Barry my car’s an old navy blue Subaru wagon. He’ll be ridin’ in style!”

His response, via Frank, included: “I’ll probably be in a wheelchair, with fireworks and brass band. An old navy blue Subaru is my favorite kind of car.”

I drove up to the airport in rush hour traffic the night before Game 1 of the World Series (which the Sox played at the Sox stadium). (Because I “live under the rock” as the media says, I didn’t even know about the World Series until later that night.) So, naturally, I was late.

When I pulled up, I peered into the window and saw him sitting there on one of those soulless multi-seat benches. He was a hunched-over old man, wearing sneakers, jeans, a black hoodie, and a black winter cap, but it was him all right. I put on my hazards and went in. He looked up, I said “Barry!” His face lit up. “Hi! Vanessa! You’re here!” He got up and gave me a big hug. “So great to meet you! Thank you so much for picking me up!”

I got him settled into my car and we took off.

It was OK for a while, trying to find my way back, then I got REALLY lost. And then REALLY REALLY lost. I was telling him how I usually have a good sense of direction, but Boston is like a black hole of direction, like if we had a compass it would just be spinning around. He said, yeah, you could churn butter with that compass needle.

By now, it was getting dark and spitting rain. We asked a few folks along the way, and they were all great and pointed us in the right direction, but Cambridge/Harvard Square is a NIGHTMARE and we kept ALMOST getting there but then getting veered off onto some bridge or tunnel or one-way street or construction site. It started to get a little tense. We got a little snippy with each other.

But it was fine. I mean we were fine. We eventually got there, a mere 45 minutes late. We were saying that it was one of those experiences that would either make us loathe each other or bond us for life. I’m pleased to say that I’m almost positive it was the latter. 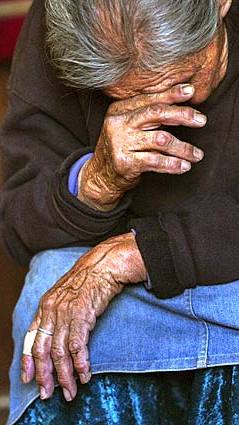 Grandma Pauline was my hero. A Navajo elder, she lived a traditional life on the Navajo reservation in what is known as Arizona. She lived a hard life–hard by our industrial-world standards, and made harder by the coal mining occupation to which she refused to concede. She stayed on her ancestral lands, stood strong against invasion, oppression, and relocation, and kept her language and culture alive.

Several years ago, with a group of others, I spent a week on Grandma Pauline’s land, helping out with her day-to-day living–which has grown increasingly more difficult due to the occupation–in order to support her resistance. We brought our own food and water (there was no running water or electricity), stayed in her sheepherders’ hogan (traditional Navajo house), and did whatever she needed us to do (herd sheep, chop wood, repair buildings).

Pauline was, as you can imagine, a total bad-ass, and quite intimidating. She was old but seemed immortal. She taught me so much–not literally, as she was not there to be my teacher, I was there to be her worker, and also we did not speak the same language. But seeing her life, knowing her struggle, experiencing just a small taste of that incredible land and its people and history–it changed me.

Read about my trip to the Navajo reservation here.

Now, in the words of my friend Jake, who was very close to her, Grandma Pauline “rests on the land.” She fought for 40 years, a fight which will continue beyond her death, beyond the deaths of all of us.

But this is not about sadness, and this is not about me. Indigenous people–their cultures and traditions, which could teach us so much about how to live in accordance with ourselves, each other, and the earth–they still exist, but they are still being forgotten, through cultural or flat-out literal genocide.

So what do we do? What we can. Me, I volunteered for Black Mesa Indigenous Support, and continue to raise consciousness, and educate myself, and seek ways to support the efforts of others, when the fight is not mine. I try to raise my child to have an awareness of indigenous cultures so that they do not seem foreign or simply nonexistent.

We are all called to something. We don’t need to have the same causes, fight the same fights. There is no one right way. In the face of mass injustice, it is easy to forget that, and all to easy to feel helpless. We do what we can.

photo credit, Her Life Belongs to the Land

A good fire is based on oxygen; based on, if could be said, the spaces between, the absence. Absence is a funny thing, especially with regards to desire. Everything contains absence, nothing is completely present. So we always desire something we cannot (fully) have. Like the Lacan/Hegel catch-22: the desire for another’s desire (the only true human desire). It is a desire that can never be sated, because how do we attain (“have” or “own”) another’s desire?