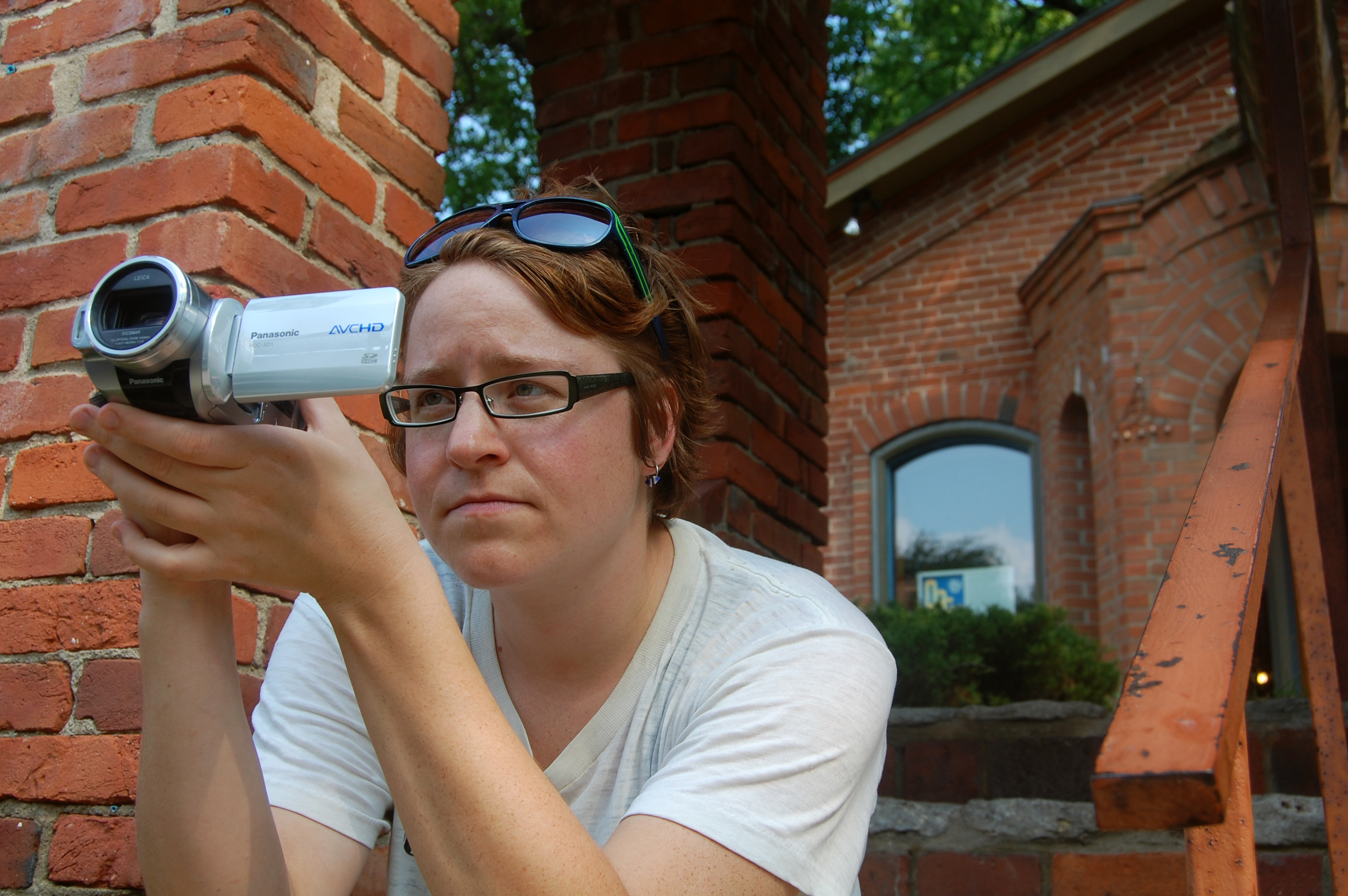 Although Vanessa Query attended Antioch College for four years, it wasn’t until the summer after her 2006 graduation, when she worked at the Emporium, that she fell in love with Yellow Springs.

After she returned to her hometown of Providence, R.I., for two years, it was that summer in 2006 that inspired her to return to the village last September.

“I’m about community — I didn’t find one in Rhode Island,” Query said in a recent interview. “Politically and artistically, I wanted to be around people I could relate to, and have time to be laid back and artsy and have that be valued.”

In the time since, that decision has paid off. As well as working as a graphic designer at the Yellow Springs News and as the events coordinator for the Emporium, Query has just finished her first film, a short film called “Love Conquers All.” Starring Lee Johnson and Olivia Byrnes, the film chronicles a young man’s (Johnson) increasingly obsessive interest in a young woman. Query adapted the screenplay from a short story by the Irish author Mike McCormack, entitled “Amor Vincit Omnia,” which means “love conquers all” in Latin. In addition to directing and writing the screenplay, Query also produced and edited it herself.

Both the short story and the movie reflect Query’s interest in combining tragedy and comedy, a trait she sees most often in Irish films and literature, particularly in the work of Patrick McCabe and Neil Jordan. Sam Raimi, the creator of the “Evil Dead” movies, is one of the only Americans who can do funny and scary well, Query thinks. She also finds Raimi inspiring because the movies “were made by a group of friends from Detroit. Things like that make it seem like you can just make a movie,” she said.

After Query came back to town, a friend sold her a high-definition video camera. So for her first several months back in Yellow Springs, Query worked on several short documentaries about the village, including one about the power outage in September and one about the party at the Emporium following the election. She also does video work for hire, including filming the local band Paul’s Apartment and even a reality TV application.

“I discovered that I could edit videos all day and be completely happy,” Query said.

The idea for her film emerged in April when during a conversation with Johnson they realized they wanted to make a video together before he moved away in August.

“Suddenly I had a camera and a lead actor — that’s like 50 percent,” she said. “Steve Bognar lent me sound equipment — another 25 percent. It all just fell into place.”

Query used a screenplay that she had written five years earlier, while a theater student at Antioch. Although she always wanted to make movies, Query said that she “fell into” the theater department at Antioch after she worked as a production assistant for a show and connected with Louise Smith, the theater professor.

“The film department at Antioch seemed mostly about working with equipment — I wanted to learn to work with people,” she said. This previous experience working with actors allowed her to feel comfortable using non-actors in her movie.

The experience of making the film was very positive, she said.

“The cast and crew were so on board,” she said. “They were always willing to follow me, even if they didn’t know where I was going and I didn’t know either.”

The filming took about three weeks, and the editing another three.

“It was so fun — I realized I could make movies, and more importantly, I wanted to,” she said.

Some of the group behind “Love Conquers All” are planning on making more films in the future.

“I see this as the beginning of a film-making collective — that’s my dream,” Query said.