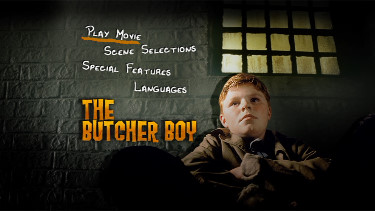 The Butcher Boy on DVD–almost 10 years after its US VHS release. Includes (a painfully small amount of painfully short) deleted scenes and full-length commentary by writer/director Neil Jordan. Mmm mm. He reminded me why this has been my favorite film since I first saw it in 2000: the constant seemingly contradictory states, the black humor, the kind of terror of it, the expression of childhood and of life in general, Eamonn Owens’ performance, absolutely everything else about it, in particular these things quoted from Jordan’s commentary: 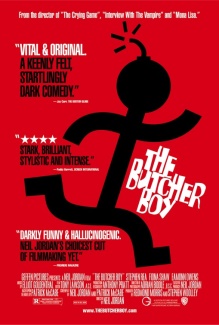 “In the same moment a face can convey maybe two or three different emotions, and I found that constantly with Eamonn Owens; he would look sad and murderous at the same time….”

“I find this scene kind of terrifying, when he was playing it I found it terrifying, but it’s also very funny, you know? So he can play both things at the same time. It’s not like he’s moving from one moment to another… he’s in both dimensions at exactly the same time, really, and he kind of reached the point of almost madness, which is quite frightening, and at the same time, he sees cakes.”

“It was a great film to work on, because you constantly had about three realities going on at the same time.”

“Brendan [Gleeson], being the great actor that he is, he gave this guy extraordinary authority and extraordinary brutality, but at the same time a kind of kindness, you know what I mean, because he’s the only father figure to all these kids, you know?”

“It does several things at the same time; it’s both funny and kind of yearning, isn’t it?”

“We structured the script, really, around moments of utter despair and utter savagery and moments of insane humor.” 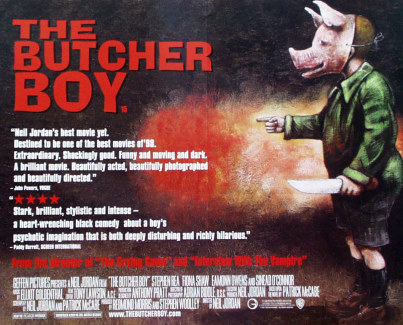 “It’s probably the most difficult for audiences to accept really–I mean they can accept starting with darkness and going to light, but starting with light and humor and stuff and going towards a dark place, it’s kind of a very difficult journey for them to take. That was part of the difficulty probably with the release of the film, because it does get so dark, and so brutal, from such an area of charm. But it’s almost–it’s the kind of blackness that’s so black it’s almost funny.”

“[In madness] you get a tremendous amount of humor, the humor which the ends just don’t match, yeah.”

“I know that the events are horrible and yet it still is a comedy.” 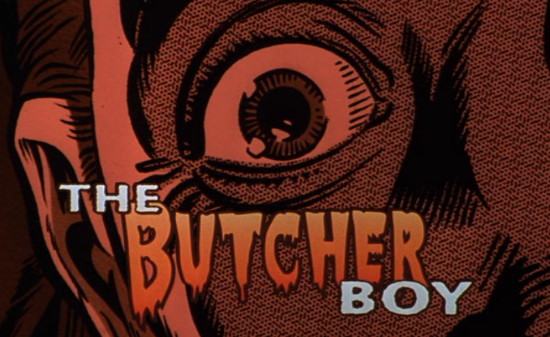 comedy, theory, and other forms of beauty
with your host, Vanessa Query
"You post shit that matters."