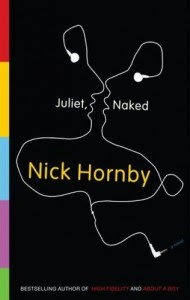 When I do come across something I loved and want to share, I tend to cite quotes and passages as a way to tell people why they need to read/watch the intended work. Because I prize comedy above all else, funny, stand-alone, microcosmic passages are often enough.

Not always, though. Like right now. I am faced with a dilemma. I have just read an amazing book by a writer who apparently only writes amazing things that I think everyone should read. And in this case, stand-alone passages won’t do, because it’s the intricacies of the text, all the things in it that interlace, that create its best moments.

On several occasions while reading Nick Hornby’s new novel, Juliet, Naked, I was compulsed to stop reading and laugh “with inappropriate volume and vigor, and at preposterous length” (as a character in the book once did). Sometimes I had to put the book down for fear of laughing it out of my grasp. Then I would pause, compose myself, read the bit again, and laugh again, slightly less vigorously. Then I would continue reading.

So you see, a mere passage would invariably fail in trying to convince you–yes YOU–why you need to read this book. There are passages that stand on their own just fine, of course; e.g.:

He put the hot dogs in the shopping cart and then took them out again. What percentage of smart girls were vegetarian? It couldn’t be as high as fifty, right? So the chances were that she ate meat. He put them back in the cart. The trouble was that even young female carnivores wouldn’t eat red meat. Well, hot dogs were pinky orange. Did pinky orange count as red? He was pretty sure the strange hue was chemical rather than sanguine. Vegetarians could eat chemicals, right?

I guess I should qualify, for those of you who don’t prize comedy above all else, that this was not your average mere laughing at a joke kind of laughter, nor was laughter my only physical/verbal/visceral response to the novel. It is the kind of laughter and response you are rewarded with when you let a writer take you down a path they made, and you follow them unquestioningly, and you might get lost, but you trust them, and they show you so many things about art and life and humanity that are funny and absurd and beautiful and obnoxious and real. And they pull you along, and you follow, and you listen to every word they say and look at every sight they point out, until they have you wrapped around their fingers and their brains and their pens. You lose your will you follow them so strong, and then it all pays off, because they show you the most artsy and alive and human thing you can imagine. And you laugh, you laugh a whole lot, and any nervousness about following them is gone, because you’ve been rewarded, and your soul pulses in a rush of ripe elan, and you love it, and you love it, and you keep following, because you know they’ll give you even more. And they do.

That is why you–yes, YOU–should read Juliet, Naked by Nick Hornby. It’s Not A Book; It’s An Experience. 5 out of 5 stars.

comedy, theory, and other forms of beauty
with your host, Vanessa Query
"You post shit that matters."